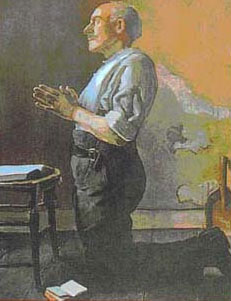 1856
Matt Talbot was born on 2nd May to Elizabeth and Charles Talbot at Alderborough Court, North Strand.  He was baptised in the Pro-Cathedral on 5th May.

1868
Having attended school for only one year, Matt got his first job.  At this time he began to drink and later admitted that from his early teens to his late twenties his only aim in life was heavy drinking.

1884
Matt stopped drinking and made an initial three month pledge to God not to drink.  Despite great temptation in the early stages he never took a drink again.

1884-1925
His remaining forty-one ‘dry’ years were lived heroically – attending daily Mass, praying constantly, helping the poor and living the ascetic life-style of Celtic spirituality.  This life was his prayer to God and his defence against a reversion to alcoholism.

1925 +
Matt died in Granby Lane on Trinity Sunday, 7th June, on his way to Mass in Dominick Street.  The chains found on his body at death were a symbol of his devotion to Mary, to whom he wished to devote himself as a slave.

Within a short time of his death, Matt’s reputation as a saintly man and especially as a protector of those suffering from all forms of addiction and their families was being established.

Matt Talbot was declared Venerable in 1973 which means the Church has decided that from a human point of view he has the qualifications of a Saint.

2006
Timothy Schmalz, a Canadian sculptor, donated this memorial to the Pro-Cathedral on the 150th anniversary of Matt’s birth and baptism.

Prayer for the Canonisation of Venerable Matt Talbot

Lord, in your servant, Matt Talbot
you have given us a wonderful example
of triumph over addiction, of devotion to duty,
and of lifelong reverence for the Most Holy Sacrament.

May his life of prayer and penance
give us courage to take up our crosses
and follow in the footsteps
of Our Lord and Saviour, Jesus Christ.

Father,
if it be your will that your beloved servant
should be glorified by your Church,
make known by your heavenly favours
the power he enjoys in your sight.

We ask this through the same
Jesus Christ Our Lord.
Amen.

Cause for the Beatification of the Venerable Matt Talbot

Favours received through the intercession of the Venerable Matt Talbot should be notified as soon as possible to: