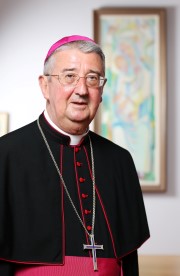 He was ordained priest on 25th May 1969.  He later pursued higher studies in moral theology at the Pontifical University of St Thomas Aquinas (Angelicum) in Rome.  In 1973-74 he was Curate at the Parish of St Brigid in Cabinteely.  In 1975 he was responsible for the pastoral care of Dublin pilgrims during the Holy Year in Rome.

During his service at the Pontifical Council for Justice and Peace, Archbishop Martin represented the Holy See at the major United Nations Conferences on social questions in the 1990’s.  He also participated in activities of the World Bank and the International Monetary Fund, especially on the theme of international debt and poverty reduction.

In March 2001 he was elevated to the dignity of Archbishop and Apostolic Nuncio and undertook responsibilities as Permanent Observer of the Holy See in Geneva, at the United Nations Office and Specialised Agencies and at the World Trade Organisation.  He was appointed Coadjutor Archbishop of Dublin on May 3rd 2003.  He succeeded Cardinal Desmond Connell as Archbishop of Dublin on 26 April 2004.

He is a Member of the Council of the General Secretary of the Synod of Bishops and of the Pontifical Council for Social Communications.

As Archbishop of Dublin, Dr. Martin is patron of 470 primary schools and 185 secondary schools in the Diocese.  In that capacity, he has been to the forefront of the ongoing debate on the role of the Catholic Church in Irish schools.  He is also patron of Mater Dei Institute of Education, Dublin’s Third Level College for the formation of teachers of Religion.  Archbishop Martin is also Chairman of Our Lady’s Hospital for Sick Children in Crumlin.

Master of Ceremonies to the Archbishop
Rev. Damian McNeice